Come to one of Africa’s most important Western Lowland Gorilla tracking destinations – the Congo Basin – for an opportunity to engage with science and nature through exploration.

Founded on research and conservation, our gorilla tracking experiences at Ngaga and Sangha are conscious of our impact. We believe in observation, not engagement, and connecting with the gorilla families we meet in a respectful, authentic and personal way.

Explore the pristine environment and diverse life of the Congo Basin, on foot, at Ngaga Camp and Sangha Lodge.

Search alongside our trackers and research team for the critically endangered Western Lowland Gorilla in Odzala-Kokoua National Park and Dzanga-Sangha Special Reserve. Gorilla tracks with us entail a maximum of 3-4 guests, as well as a guide and a tracker. The gorillas can then be observed for 1 hour going about their usual activities (often in the trees).

Enquire about a booking

Select an icon to find out more

Maintain the prescribed distance from the gorillas at all times

With Western Lowland Gorilla tracking in the Congo Basin, you will find a genuine connection.

The primate researchers at our camps, whom you may get to meet, work with the gorilla families on a daily basis to maintain familiarity. Our gorilla tracking philosophy is to allow the gorillas’ natural behaviours to continue, uninterrupted, as we observe from a respectful distance.

Following the devastating Ebola outbreak that reduced gorilla populations in the early 2000s, we are fastidious about the physical health and mental well-being of the gorilla families.

This is why we request pre-arrival medical checks, keep groups small and wear medical masks once we are close to the families – to protect them against the airborne diseases to which they are very susceptible. With this in mind, Ngaga Camp near Odzala-Kokoua National Park has become one of Africa’s most important and respectful gorilla tracking destinations.

Western Lowland Gorillas are slightly smaller in size, have shorter fur and a higher fruit consumption in their diet (which means more energy to climb trees and be highly active) when compared to their more frequently visited mountain cousin.

There are several groups of gorillas found in the Ndzehi Concession surrounding Ngaga Camp. Three of these groups have been habituated, 2 can be observed by guests and the third remains a research group (available to guests at the discretion of the research team). Each group is known by the silverback at the head of the family, whimsically named after celestial beings. 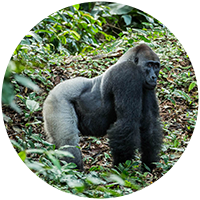 The first of these groups to have been habituated by Magda and Germán, the leaders of the research team, this group is headed by the silverback named Neptuno.

FAMILY MEMBERS
Neptuno is an enormous, and sometimes intimidating, male who seems especially curious about the world around him. Apart from him, Caco is the obvious one to look out for. A sub-adult male, putting on a bit of bulk before he starts moving away from the main group, he tends to be near, but not necessarily in the group. He is known for silently sneaking up to visitors from behind, watching us while we watch the rest of the group. Pan is a male younger than Caco who will sometimes test his strength by dangling with one arm, fool around with other youngsters, or balance a few small branches on his head. 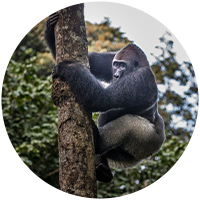 The second habituated social group being studied by the research team is led by the silverback named Jupiter with a home range south of Ngaga Camp.

FAMILY MEMBERS
Just as enormous as Neptuno, Jupiter is unusually shy and retiring for a silverback. He prefers to grunt and have branches and fruit dropped for him, rather than climbing the trees. Although, for the right fruit, he’ll climb the tallest tree. Within Jupiter’s group, there is almost always a relatively small baby clinging to its mother. Cura, an adolescent male with a lot of energy, is often seen playing with other adolescents while Lua, a sub-adult male, has a slight deformity in his forearms from a possible injury that has healed incorrectly, so he is often seen walking bipedal (as human beings do).

”98%. That’s how much of our DNA we share with these incredible apes. These encounters will forever be etched in my memory and I’m proud to have captured some truly special moments in the forest. Until next time, Congo. I miss you already.”

Make use of our all-inclusive travel options to meet the Western Lowland Gorillas.

News, updates and stories about the rainforests, our guides, sightings, research and our community. 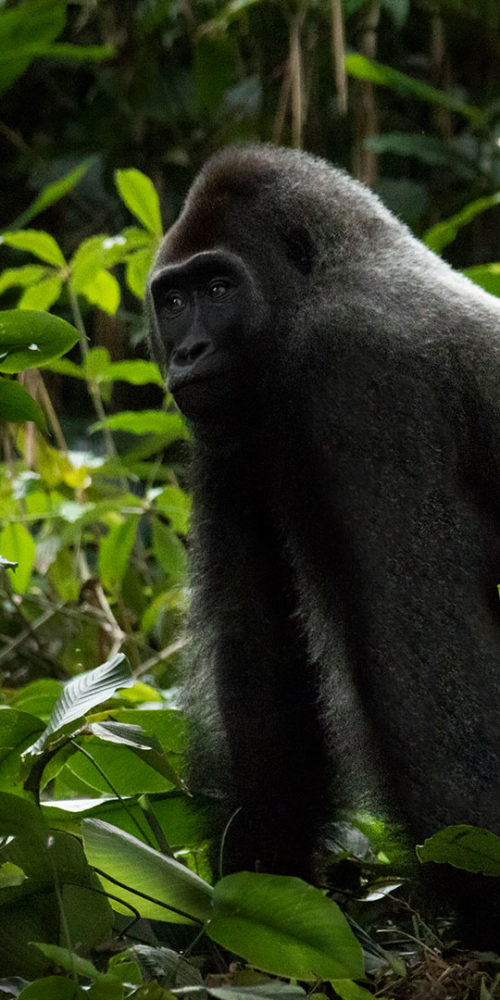 Western Lowland vs Mountain Gorillas: A Comparison Many of our guests have previously encountered mountain gorillas in Rwanda or Uganda. There are several key differences between the two species, which…
Classic Portfolio
Love0 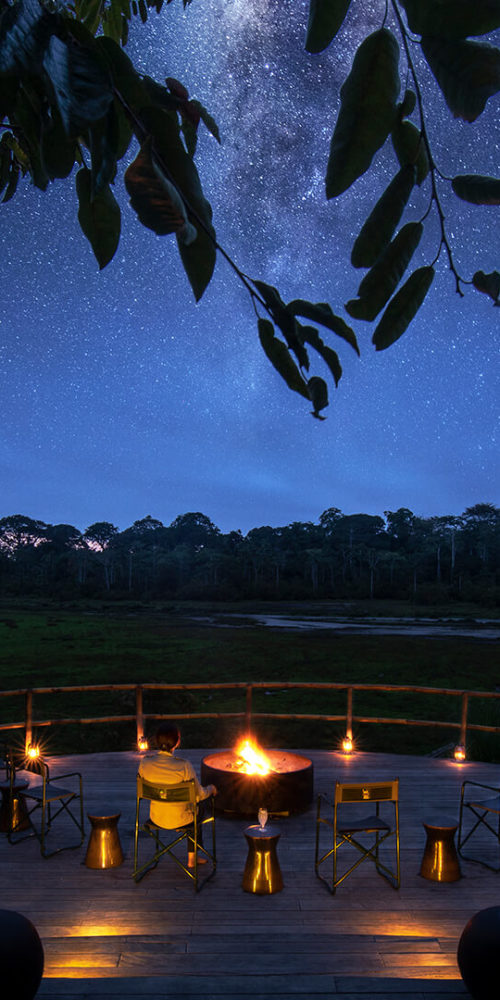 The Story of CCC

Together for conservation – research, communities & tourism COMMUNITIES & GORILLA RESEARCH MEET… In Republic of the Congo (Congo-Brazzaville), close to the geographical “Heart of Africa“, lies a near-mythical place…
CCCAdmin
Love0 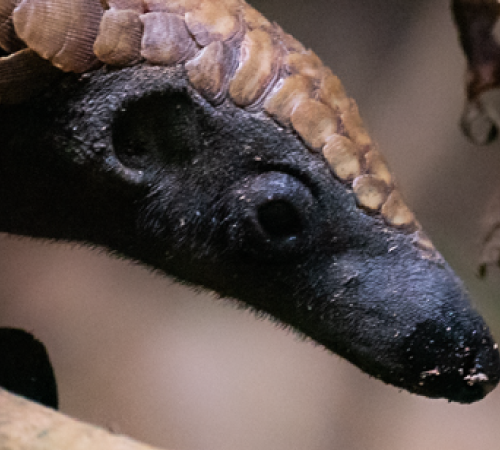 Interview with the Legendary Rod Cassidy

Rod Cassidy is an avid birder and conservationist, owning and managing Sangha Lodge in the Central African Republic together with his wife, Tamar. Rod and Elza Gillman from Congo Conservation…
Classic Portfolio
Love0
Odzala-Kokoua National Park is one of Africa’s o

We had a chuckle at this #FieldNoteFriday sighting

This week’s #FieldNoteFriday sighting comes from

In a time of access challenges, Republic of Congo

There’s not many better ways to explore the rain

Find the Journey for You
About Our Camps
Who is ‘Congo Conservation Company’?
Everything You Need to Know (FAQs)
Announcement