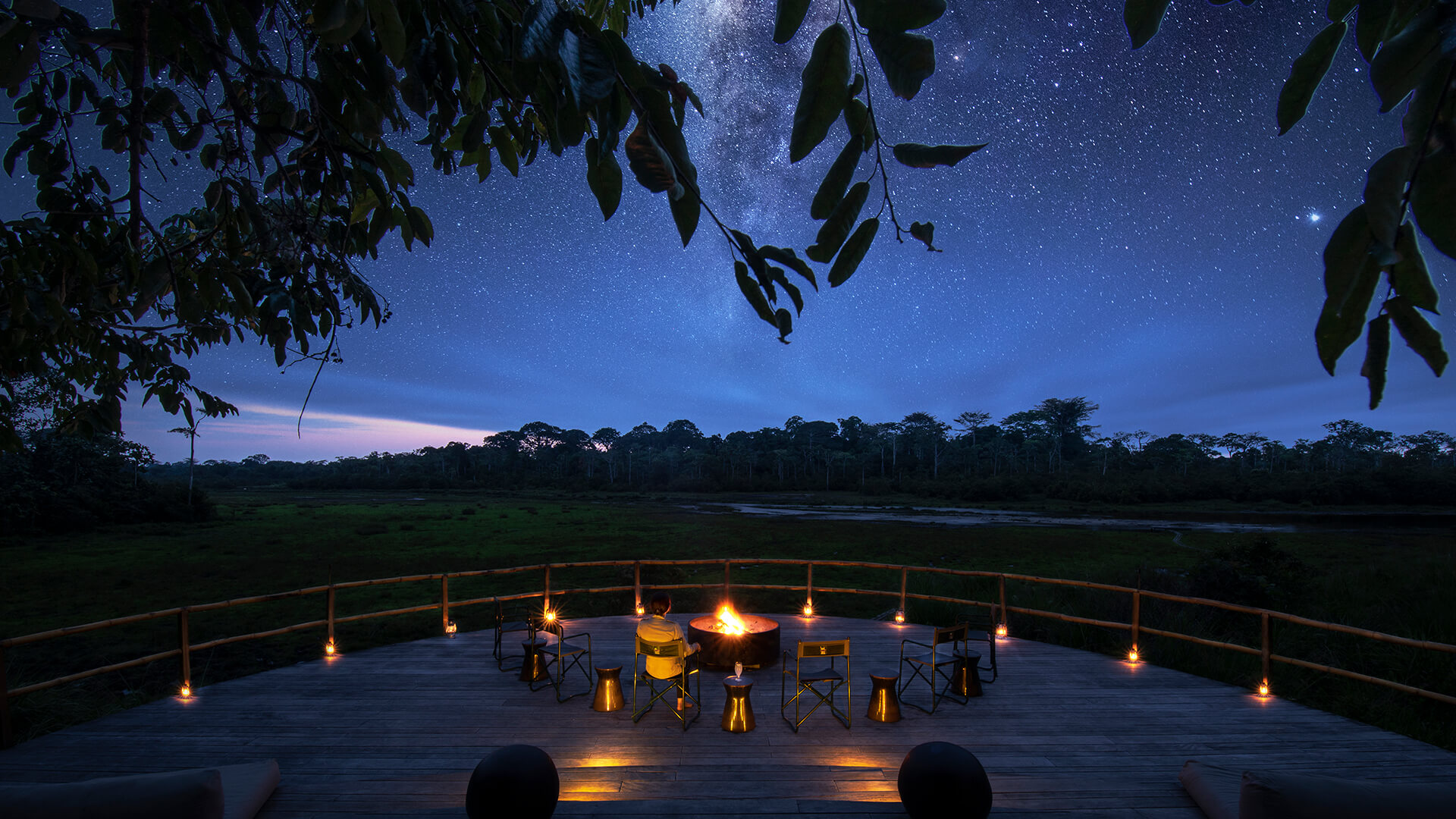 The Story of CCC

Together for conservation – research, communities & tourism

In Republic of the Congo (Congo-Brazzaville), close to the geographical “Heart of Africa“, lies a near-mythical place of astounding biodiversity. The Congo Basin is a place few people have ever had the chance to visit. The communities of the Congo Basin have a deep affinity for the land, as well as its inhabitants, and searched for a way to protect and conserve the delicate ecosystem of the region.

In Odzala-Kokoua National Park, researchers became a viable course for these communities to take their message to the key decision makers of the Republic of the Congo in Brazzaville. Over many years spent in Africa, scientists Magdalena Bermejo and Germán Illera had come to understand the connection between conservation and communities. They became the voice for these communities during a catalyst moment in the Republic of the Congo, the Ebola outbreak of 2002-2003.

During the first gorilla and chimpanzee studies funded by the European Union, Magda and Germán associated the Ebola outbreak in West and Central Africa communities with the 5000 Western Lowland Gorillas who died in 2002 and 2003. This amounted to a loss of 95% of the Western Lowland Gorilla population within the Lossi Community Reserve area at the time. This area was a symbol within the Republic of the Congo as a community driven conservation area and as such, the loss was devastating for not only the close-knit communities found here, but also the country as a whole.

During this trying time, the communities became very involved in helping the researchers to investigate the Ebola outbreak. They did this without consideration of personal risk or the heart-breaking circumstances, including the loss of their own family members.

An unbreakable bond was formed between Magda, Germán, their research team and the communities of Odzala-Kokoua National Park as people worked together to help those who couldn’t help themselves – the gorillas.

Magda, Germán and their team were the first people to study Western Lowland Gorillas. A prerequisite to developing their research programme, a mutual respect must be built between the researchers and the gorillas requiring daily visits to a specific group over about three years. By 2002, they had identified 10 social groups with a population of 143 in the northwest of Republic of the Congo.

The team continued their conservation research programme and initiated a pilot gorilla tourism programme in the Ngaga-Ndzehi area, with the blessing of the communities, in an effort to drive awareness and support for the region following the Ebola outbreak.

Here, Ngaga Camp was founded to the south-west of Odzala-Kokoua National Park with one of the focal research gorilla groups. The Congolese government soon wanted to look into opportunities to grow tourism and held a meeting of great minds to discuss the opportunities within the region. Sabine Plattner was one such mind and founded the Congo Conservation Company (CCC) as an actor for true conservation within the region through the development of tourism.

Research at Ngaga found a new approach with the support of Sabine Plattner African Charities (SPAC) and CCC, joining communities, science and tourism on the grounds of conservation. By opening up a second research gorilla family to tourism and establishing two more camps by 2015 (Lango and Mboko) within Odzala-Kokoua National Park, CCC is pioneering an incredibly unique and important destination.

A team of permanent researchers and trackers from nearby communities work with the gorilla families on a daily basis. Guest researchers working on shorter term projects are frequently welcomed by our team.

Guests of Odzala are led on expeditions into the Marantaceae forest in search of the critically endangered species, the western lowland gorilla. Gorilla tracks entail 3-4 guests as well as a guide and a tracker from our treasured team of researchers in an untamed forest with the gorillas going about their usual activities (often seen in the trees).

Following the Ebola outbreak in the early 2000s, the team is fastidious about the health of the gorilla families and this is why we request pre-arrival medical checks and wear medical masks – to protect the gorillas against the airborne diseases to which they are very susceptible. In 2020, with the outbreak of COVID-19, Congo Conservation Company suspended all incoming arrivals to its camps for a time to ensure that the region’s remote human populations and vulnerable gorillas were isolated from any potential threats resulting from internationally travelling guests. With this in mind, Ngaga Camp has become one of Africa’s most important and respectful gorilla tracking destinations, offering an opportunity to engage with science and nature through thoughtful exploration.

THE FUTURE FOR CONGO CONSERVATION COMPANY

During 2019, CCC launched the first journeys connecting Odzala Discovery Camps in Republic of the Congo with Sangha Lodge in Dzanga-Sangha Special Reserve by forging a new access route through a southern point of Central African Republic. Sangha Lodge supports crucial conservation efforts, including pangolin research, wildlife rehabilitation, the reduction of poaching for the bushmeat trade, as well as socio-economic development within the region.

In collaboration with government, researchers, neighbouring communities and key partnerships with environmental organisations, CCC continues to pioneer tourism in the Congo Basin with future plans to expand access into new regions.

Through the tourism developments, conservation has been given a higher value by the communities within and surrounding the national park as a result of job creation and investment in the area. Together – community, research and tourism are working towards a stronger future for the Congo Basin and all its inhabitants.